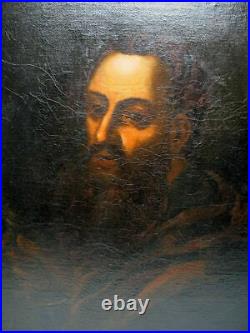 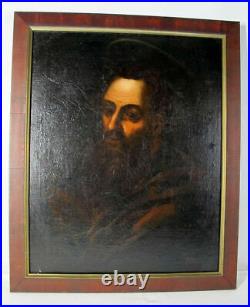 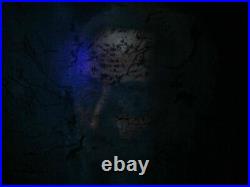 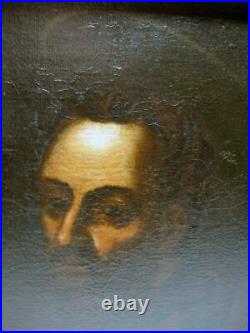 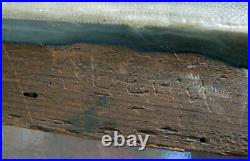 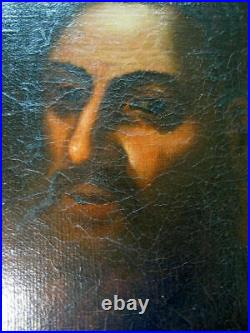 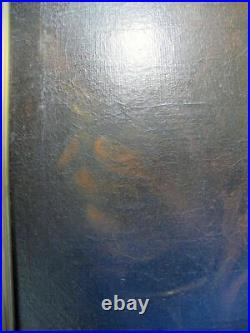 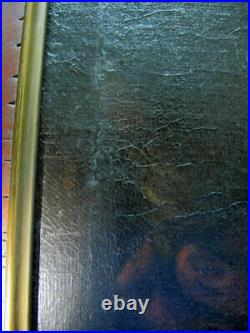 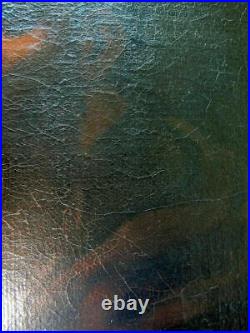 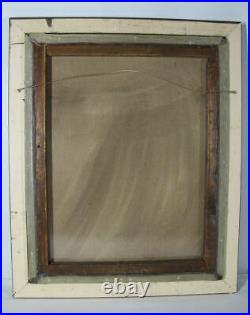 “PORTRAIT OF A SAINT”. On the stretcher on the back is the name Ribera, which when looking to match up we saw comes up to. Jusepe (Giuseppe) de Ribera (1591 – 1652). I can NOT say definitively this is his work, however it might be by a follower or close circle. This was acquired from previous owner from at a multi estate sale in southwest New Jersey. It depicts a portrait of a saint, with a halo. Painting is unfrmed 21 1/4″ x 26 3/4″ and framed 25 5/8″ x 31″. Painting checked on black light has touch ups, which would be inline with the restorations over the time. A little biography from Ask Art. Jusepe (Giuseppe) de Ribera was active/lived in Spain, Italy. Jusepe de Ribera is known for religious figure painting. Museum and Research InstituteThe “young Spaniard working in the manner of Caravaggio” was causing the Bolognese artists concern, Lodovico Carracci wrote admiringly of Jusepe de Ribera in 1618. Ribera, second son of a Valencian shoemaker, had only been in Italy about four years and was already making a splash. After working in Rome and Parma in 1616, Ribera settled in Naples, where he spent his career. Ribera’s art combined knowledge of the Carracci and Caravaggio with Spanish realism and vigorous, scratchy brushwork. He practiced precise draftsmanship and used working-class models. His large output consisted mainly of religious works, including harrowing scenes of martyrdom that laid the foundation for the Neapolitan painting tradition one critic called the poetry of the repulsive. After 1632 Ribera’s paintings became softer in tone and more classical in feeling. His palette lightened, perhaps through Venetian or Flemish influence, and he became primarily concerned with the expression of spirituality. Throughout the decade, he received major commissions from the Spanish king and the Neapolitan viceroys. By the 1640s Ribera was wealthy and operated a large workshop. His influence was extensive, inspiring artists such as Francisco de Zurbarán, Salvator Rosa, and Luca Giordano. Another bio on AskArt: Jusepe de Ribera was born in 1591 at Jativa, near Valencia, Spain. Nothing is known of his early work except that he received his first instruction from Francisco Ribalta in Valencia and his work was influenced by Veronese and Correggio. Ribera left Spain when he was sixteen, spent some time in Parma and Rome, then settled in Naples in 1616. Naples was a Spanish possession at the time and the largest city in Europe after Paris. Ribera’s art followed in the tradition of Caravaggio; the Roman Catholic Church provided most of the subject matter. He was a facile and accomplished worker and so successful in his commissions that he employed a large staff of assistants. He died in 1652. Written and submitted by Jean Ershler Schatz, artist and researcher from Laguna Woods, California. Sources include:Mark Stevens in Newsweek, January 17, 1983 Masterpieces of Art, catalogue of the New York World’s Fair 1940. The item “PORTRAIT OF A SAINT JUSEPE DE RIBERA FOLLOWER ANTIQUE OLD MASTER OIL PAINTING” is in sale since Friday, June 5, 2020. This item is in the category “Art\Paintings”. The seller is “g2015m” and is located in Brooklyn, New York. This item can be shipped worldwide.